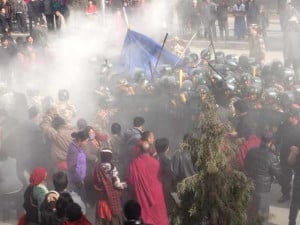 Troops are seen closing in on Dorje Rinchen’s body after he has self-immolated. Smoke can still be seen arising from his body and it is not clear if he was still alive at this point. Laypeople and monks are trying to protect him from being taken away by troops. In Tibetan tradition, it is important to protect the body of someone who has died for religious ritual and offerings in order to ensure an auspicious rebirth. Since the self-immolations began in Tibet in 2009, many Tibetans have taken great risks to retrieve the bodies of those who have self-immolated in order to carry out religious practice.