Calls to see Panchen Lama on his 32nd birthday

By International Campaign for Tibet|April 26, 2021| 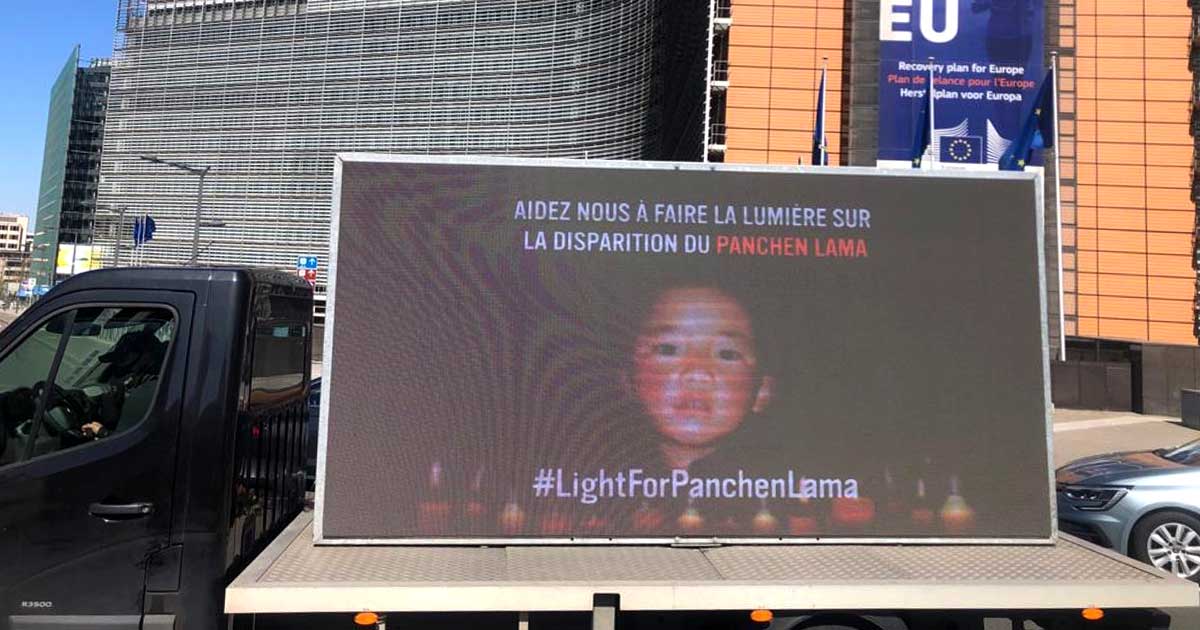 A truck showing pictures of the Panchen Lama drove around The Hague and Brussels to raise awareness about the ongoing disappearance of the Tibetan Buddhist leader.

As the 11th Panchen Lama spent another birthday missing from his people, the US government, elected leaders around the world, the reestablished monastery of the Panchen Lama in India and Tibetan authorities kept his case alive by demanding the right to see him.

“We call on the [People’s Republic of China] government to immediately make public the Tibetan-venerated Panchen Lama’s whereabouts,” US State Department spokesperson Ned Price said last week, “and to give us this opportunity to meet with the Panchen Lama in person.”

Born Gedhun Choekyi Nyima, he became the world’s youngest political prisoner at age 6 when the Chinese government kidnapped him and his family in 1995 just days after the Dalai Lama recognized him as the reincarnation of the previous 10th Panchen Lama.

No one has seen the Panchen Lama in public since, and China—which has occupied Tibet for more than 60 years—has denied repeated calls for his release.

China has also interfered in the traditional Tibetan Buddhist process of recognizing reincarnations and appointed its own Panchen Lama after detaining Gedhun Choekyi Nyima—a precursor of its plans to interfere in the selection of a future 15th Dalai Lama.

“We respect Tibetans’ right to select, educate, and venerate their own leaders,” Price said, “like the Dalai Lama and the Panchen Lama, according to their own beliefs, and without government interference.”

WATCH: @StateDeptSpox Ned Price talks about Tibet's missing #PanchenLama before his 32nd birthday, calling on #China to make his whereabouts known and allow the US to meet with him pic.twitter.com/SvNG6ygBOO

Below is a sampling of statements and events about the Panchen Lama’s 32nd birthday.

“I wish the true Panchen Lama the happiest of birthdays. I sincerely hope he is healthy, and I hope he is well, as well as he can be given the fact that the government that controls his existence has robbed him of his true destiny. My birthday present to Gedhun Choekyi Nyima is the same this year as it has been every year: to renew my call for his immediate and unconditional freedom and for that of his family as well.”

As Co-Chair of @TLHumanRights, I advocate for prisoners of conscience like Gedhun Choekyi Nyima, the 11th #PanchenLama of Tibetan Buddhism who was kidnapped by the Chinese Government in 1995. Today, on his 32nd birthday, I again call for his immediate and unconditional freedom. pic.twitter.com/LhsL9TPmla

Today the 11th Panchen Lama, Gendun Choekyi Nyima, turns 32. He was six when the CCP abducted him & his parents. The world must never forget him, and we must demand his release & continue shining a light on China’s ongoing oppression in #Tibet. pic.twitter.com/iuOf1oGNAR

“At the Standing Committee on Foreign Affairs, I had occasion to challenge Chinese government authorities about the whereabouts of Gedhun Choekyi Nyima. What I was told in 2018 is that, ‘Do not worry. He is alive. He is doing well. And he and his family do not wish to be disturbed.’ That kind of response is insufficient. That kind of response is not accountable, and it is not transparent. What we need here in Canada, what the world needs, is to lay eyes on the Panchen Lama to ascertain for ourselves about his wellbeing and about his whereabouts.”

Today is the 32nd birthday of the #PanchenLama, kidnapped by Chinese Communist authorities when he was only 6 years old, whereabouts still unknown. Tibetans and their friends at all levels continue to remember, struggle, and endure. #FreeTibet #tibet #justicefortibet #china

“Ever since your Serenity’s captivity by the Chinese Government, the incarnate lamas, monks and devotees of Tashi Lhunpo Monastery – inside and outside Tibet – have been celebrating your Birthday with mixed feelings of happiness and sadness, with fervent hope and prayers that you are well, and that one day, we will be able to see and hear your teachings! Furthermore, in our minds, we are always – day and night – keep remembering your holy presence and constantly pray for your health and happiness! Today, on this special day, we do the same!”

“The abduction and disappearance of Gedhun Choekyi Nyima is a denial and a violation of basic human rights. I demand and urge the United Nations, human rights rapporteurs, and journalists all over the world to write about him; go to Tibet and ask the Chinese government for his immediate release so that he could enjoy basic human rights like any other human being.”

“We Tibetans, all of us, will tirelessly continue to work with individuals, organizations and governments around the world for the release of Panchen Gedhun Choekyi Nyima and all other political prisoners in Tibet. We will not accept any interference from the Chinese government on the religious freedom of the Tibetan people, in particular the reincarnation of the present Dalai Lama.”

Nury Turkel, commissioner of the US Commission on International Religious Freedom and Uyghur American activist:

“The combination of the level of absurdity and ruthlessness in the CCP’s persecution of the Tibetan community should alarm the international community, which should stand united in calling for the release of the Panchen Lama.”

Nadine Maenza, a USCIRF commissioner who advocates for the Panchen Lama as part of USCIRF’s Religious Prisoners of Conscience Project:

“USCIRF renews its call for the Chinese government to allow an independent expert to visit and confirm the wellbeing of the 11th Panchen Lama, and to release him immediately and unconditionally.”

Read the full statement from USCIRF.

As the #PanchenLama turns 32, he remains among the world’s longest-held political prisoners, disappeared by the Chinese government at the age of 6—one of many facts the world must consider as the 2022 Beijing Olympics fast approaches. #Tibet 1/2

Other victims of China’s oppression

“Sharing the same religion, same fate and same suffering with our Tibetan brothers and sisters under the Chinese colonial occupation, we Mongolians are urging the Chinese government to release the Panchen Lama as well as all other Tibetan and Mongolian political prisoners.”

“Together in solidarity, we support the campaign to find and free His Holiness the Panchen Lama, so that he may assume his rightful spiritual role at the Tashi Lhunpo Monastery and reunite with the Tibetan community.”

“On behalf of the Chinese friends, I offer our greetings to the 11th Panchen Lama on his birthday … The reincarnation of the Dalai Lamas is a matter for Tibetans, Tibetan Buddhists and the Dalai Lama. We need to make it categorically clear that the Chinese government does not have any authority over it.”

“Please know that we at Human Rights Watch share your peaceful struggle for respect for religious freedom, for human rights and for the Panchen Lama’s safe return to his community.”

The New Delhi-based Centre for Himalayan Asia Studies and Engagement, the Research and Development Foundation For Integral Humanism, the Tibetan Youth Congress and Students for a Free Tibet – India organized a discussion on the “Panchen Lama’s Abduction by China and its Significance” on April 25.

Journalist and Tibetologist Vijay Kranti moderated the session, which looked at the issue of the Panchen Lama from different aspects, including legal, advocacy, religious freedom and national rights.

Bhuchung Tsering, interim president of the International Campaign for Tibet:

“Without any involvement of the current Dalai Lama, the Chinese authorities can never be able to put the stamp of legitimacy on any and every of their actions on the issue of the Tibetan people, whether it’s in the field of religion or otherwise, including the selection of religious leaders, whether it’s the Panchen Lama or a future Dalai Lama.”

Watch a recording of the full event.

ICT also helped lead a campaign that saw thousands of Tibetans and Tibet supporters light candles for the Panchen Lama’s birthday and share the images on social media using #LightForPanchenLama.

Participants at both protests called on China to release the Panchen Lama immediately and unconditionally; accept requests from the UN and governments to allow UN observers to investigate the welfare of the Panchen Lama; and respect the basic human rights of the Tibetan people.

In addition, in both The Hague and Brussels, a truck with a screen showing pictures of the Panchen Lama drove around the city to raise awareness about his disappearance among the Dutch and Belgian people.

Read a blog post by ICT’s Bhuchung Tsering on the missing Panchen Lama.

Sign ICT’s petition to US Vice President Kamala Harris, asking her for greater efforts to push for the Panchen Lama’s release.