By International Campaign for Tibet|April 21, 2021|

In what appears to be a crackdown on activists in eastern Tibet, Chinese security officers have recently detained six Tibetans across Serthar (Chinese: Seda) County in Sichuan province.

Although sources in exile have confirmed their detentions, the reason or campaign driving the string of targeted detentions remains unknown. The current whereabouts of the six Tibetans are also unknown.

The International Campaign for Tibet believes that Chinese security authorities have launched a preemptive “stability maintenance” drive to crack down on Tibetan activists prior to the forthcoming centennial anniversary of the Communist Party of China in July.

Of the six detainees, the identities of only four are known. According to Switzerland-based former political prisoner Golok Jigme, two detainees currently remain unidentified.

Tsering Dolma (aka Ghang Tsering Dolma) and the other two unidentified Tibetans were detained separately between March 31 and April 2. The prefix “Ghang” that is attached to individual names means “snow” and is a common prefix adopted by Tibetans to assert their belongingness to Tibet, the “land of snows.”

All four identified detainees have been previously detained or imprisoned for peacefully expressing their political or social beliefs. Each had actively spoken out against the repressive Chinese government policies in Tibet.

The International Campaign for Tibet is concerned about the detention of the six Tibetans, as the detentions are most likely connected to political activism or simply the expression of independent thought.

ICT calls on the Chinese authorities to release information about the reasons for the detentions and the whereabouts of the detainees. Moreover, the detainees must receive access to a lawyer of their choice and access to proper medical treatment, if needed. If the six Tibetans have solely been detained for the peaceful expression of their opinions, the Chinese government must release them immediately.

Information about the four known detainees is below. 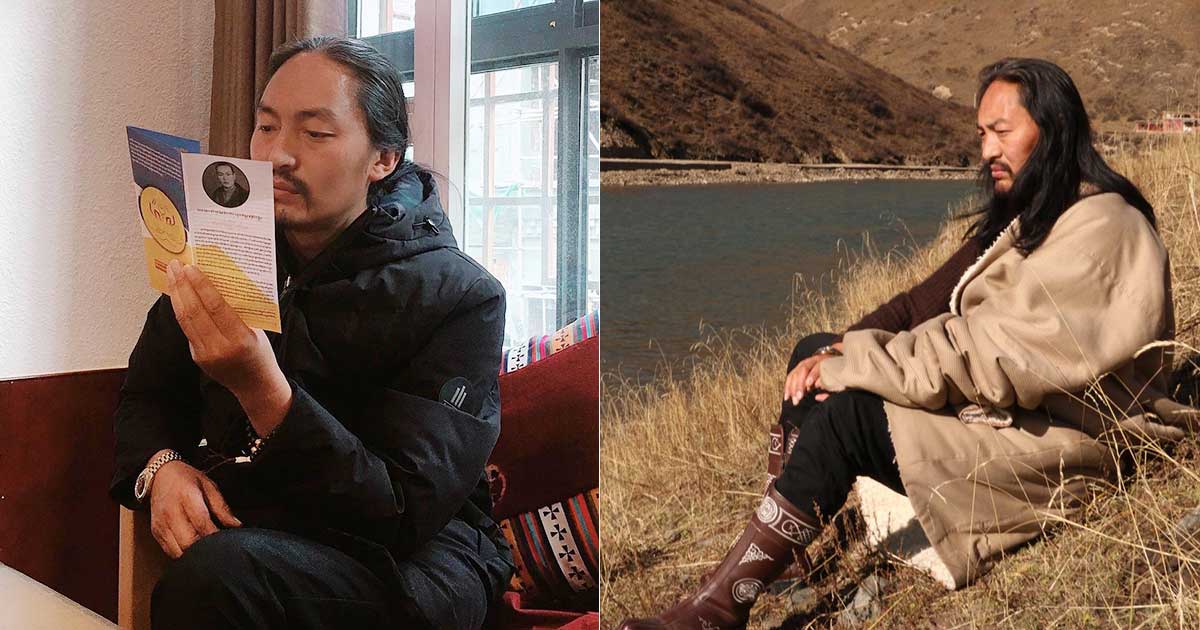 Drubpa Kyab in thoughts in his native homeland. Photo by the river taken in 2019.

Drubpa Kyab, then a teacher by profession, was first detained on Feb. 15, 2012 for his writings and activism. Authorities charged him with “illegally sending information to the outside” and for “inciting separatism”[1] and sentenced him to five years and six months in prison on Aug. 1, 2013. Although he was scheduled to be released on Aug. 16, 2017, he was released after serving four years and six months in prison on Sept. 16, 2016. However, he was quickly taken back into custody for 17 days for holding a portrait of the Dalai Lama over his head during a reception ceremony hosted by family and community members celebrating his release from prison.

Drubpa is a prolific writer whose writings like “Pain of Time” (Tibetan: དུས་ཀྱི་ན་ཟུག), “Tears of Today” (དེ་རིང་གི་མིག་ཆུ།), Call of Fate (ལས་དབང་གི་རྒྱང་འབོད།) and Color of Seasons (ལོ་ཟླའི་ཁ་དོག) mostly focus on the suffering of the Tibetan people under China’s rule. His political writings are well-respected and have proved influential across Tibetan society both inside Tibet and in exile. In exile, his writings on the spring 2008 uprising in Tibet have been published as a book under the title “Written in red blood: the year of the earth rat” (ས་བྱི་ཁྲག་བྲིས་དམར་པོ།). Drubpa also founded an association in Tibet called Resistance of Tibetan Youth against Communism.

Due to cruel and inhumane treatment in prison, Drubpa is known to have cardiac and renal conditions, as well as vision and digestive problems.

He was born in Gephen Village in Raktam Township, Sichuan, on Aug. 6, 1981 to Thubten Nyima (father) and Wangthang Dolma (mother). Drubpa and his wife Wangchuk Lhamo have a 16-year-old daughter and a 14-year-old son. 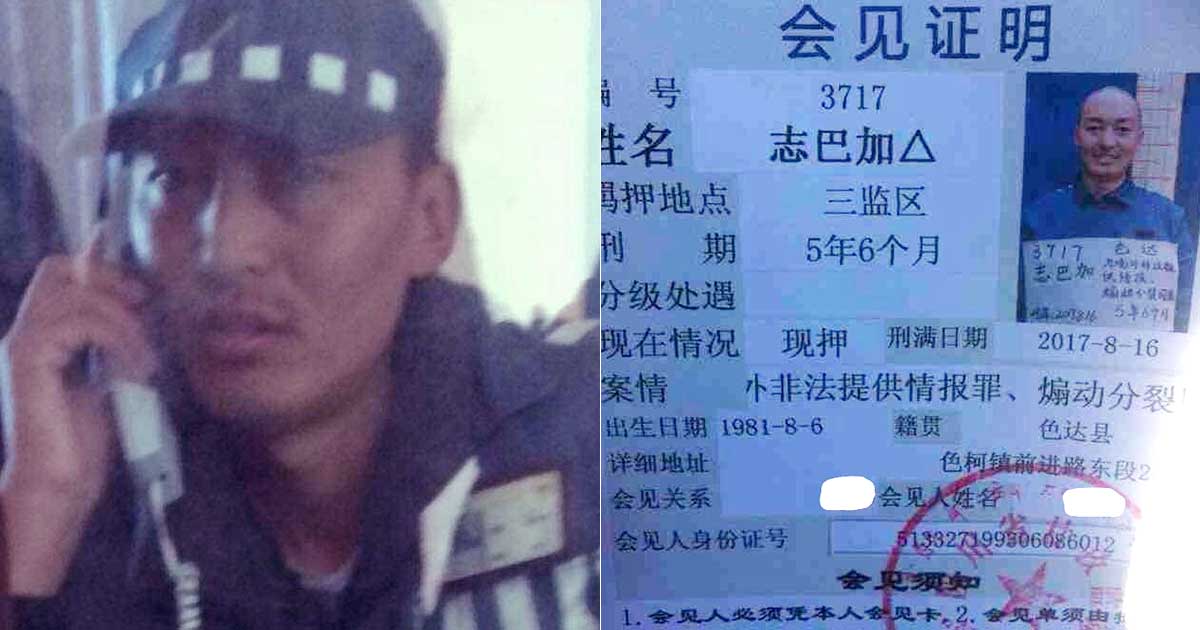 (Left) Drubpa in conversation during a prison visit. (Right) Prisoner visit permit with details of charges for Drubpa’s imprisonment and his scheduled release date. 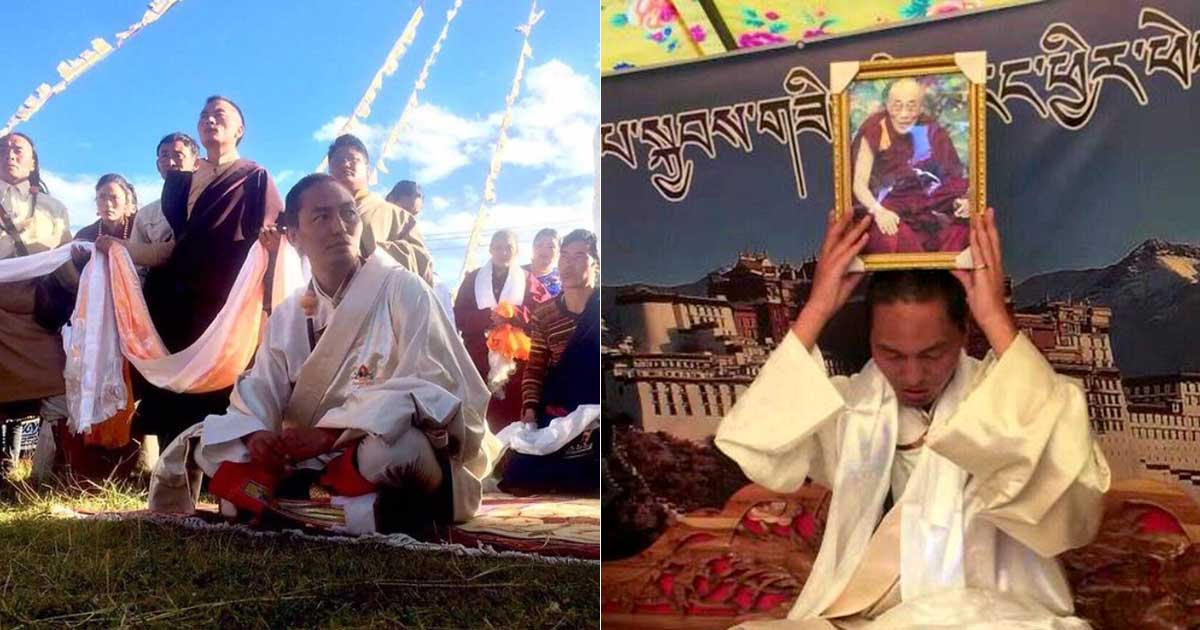 (Left) Family and community members host a reception ceremony upon Drubpa’s release from prison in September 2016. (Right) Drubpa holding a portrait of the Dalai Lama during the reception ceremony, for which he was taken back into police custody. “Ghangkye Drubpa Kyab majestically arrives outside” reads the banner in the background with an image of the iconic Potala Palace. 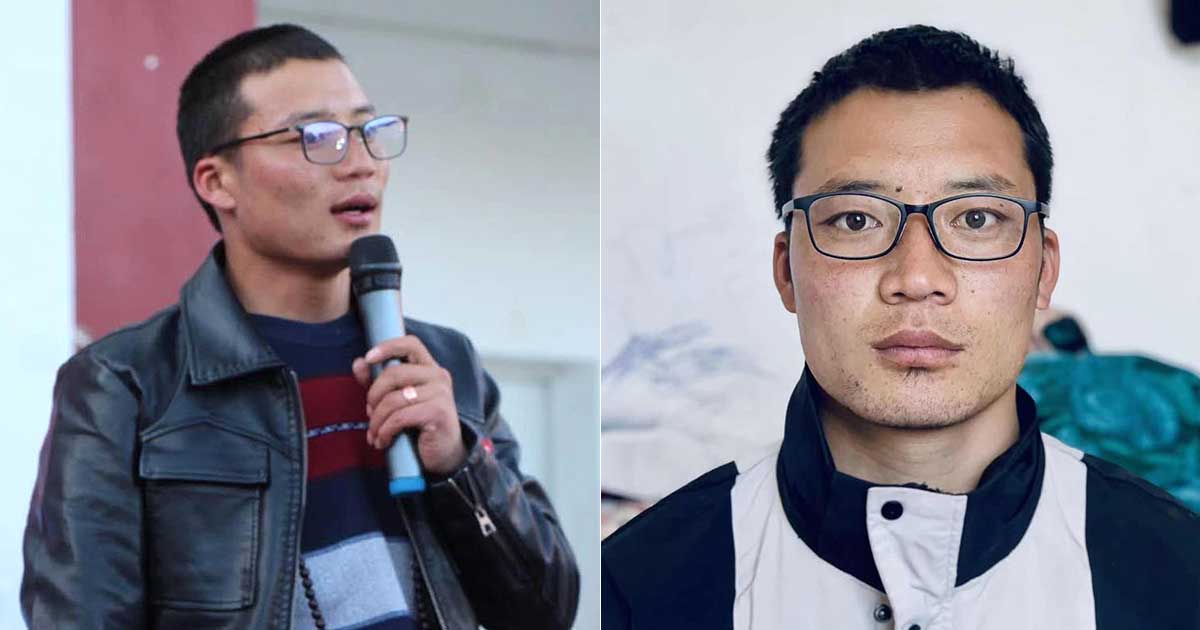 (Left) Seynam expressing his view during a meeting. (Right) Portrait of Seynam.

Seynam, a teacher by profession, is a writer advocating for Tibetan education and environmental conservation. In September 2020, the Serthar Public Security Bureau briefly detained him for 15 days along with around 10 Tibetans for attending a community “Forum on the wellbeing of parents of the land of snows” (གངས་ཅན་ཕ་མའི་བདེ་ཐང་གླེང་བ་).

Seynam comes from Tog Tsa Village, Raktam Township in Serthar County. He has a daughter. 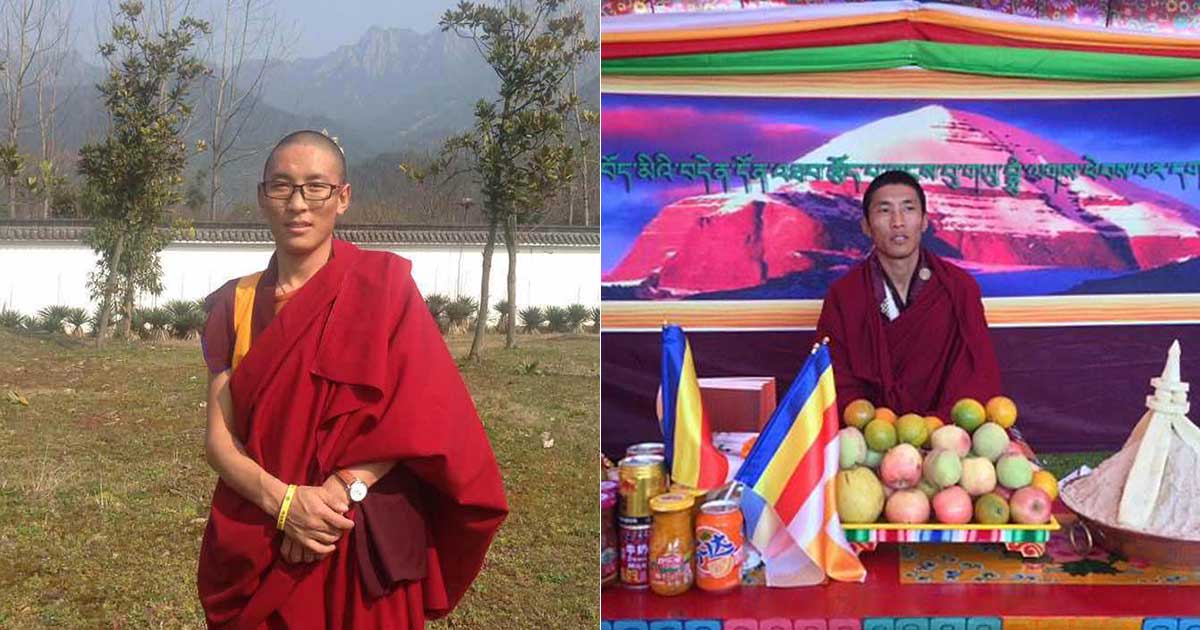 (Left) Yudrum posing for a picture. (Right) Yudrum during the reception ceremony celebrating his release from prison. “Welcome to Ghangbu Yudrum the fighter for truth and just cause of Tibetans” reads the banner in the background with an image of Mount Kailash.

Yudrum is a monk who had been imprisoned twice for his activism. He was first sentenced to a three-year prison term in 2008 for participating in a protest during which he raised the banned Tibetan national flag and called for the return of the Dalai Lama to Tibet. Not long after his release on Feb. 19, 2011, Yudrum was imprisoned again on May 14, 2012 for forming the Association to Resist the Red (དམར་རྒོལ་གདོང་ལེན་ཚོགས་པ།). He was then sentenced to two years in prison.

Upon his release in 2014, Tibetans in his village hosted a reception ceremony to celebrate his release and life. Yudrum is recognized by fellow Tibetans as an activist fighting for the truth and the just cause of Tibetans. 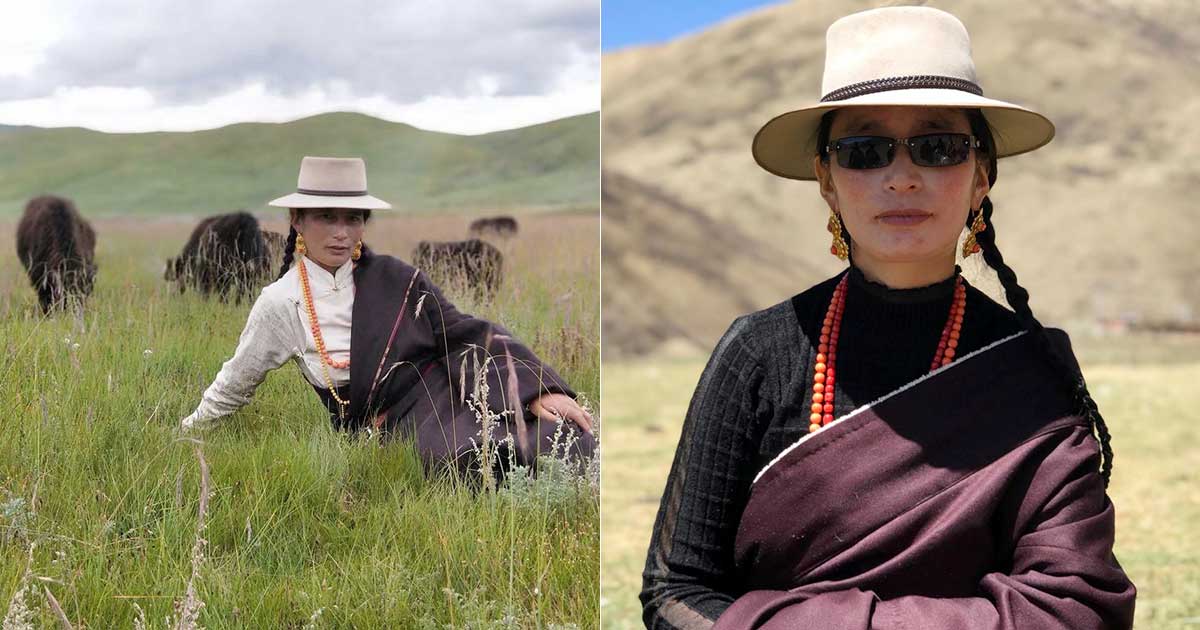 Tsering Dolma had been imprisoned at least twice, in 2008 and in 2012. While the exact date could not be ascertained, her recent arrest is known to have occurred between March 31 and April 2, 2021. Two other unidentified Tibetans are also known to have been detained around the same time as Dolma.

Dolma was first detained together with her father on June 1, 2008, for participating in the spring 2008 pan-Tibet uprising against China’s rule in Tibet. A large convoy of 13 police vehicles arrived in her native Kangtsa Village, Taktsed Township in Serthar County to arrest Dolma and her father. After her release from detention, local police detained her again in 2012. Since her release, she is required to report to the police frequently and is barred from traveling outside of her native village.

Due to the cruel and inhumane treatment she received during her multiple detentions, Dolma is known to have developed multiple health conditions, including a cardiac condition, vision problems, psychological trauma and epileptic fits.

Dolma is the mother of two sons.

Footnote:
[1] His charges were detailed on a prison visitor permit issued to a relative.