By International Campaign for Tibet|May 8, 2019| 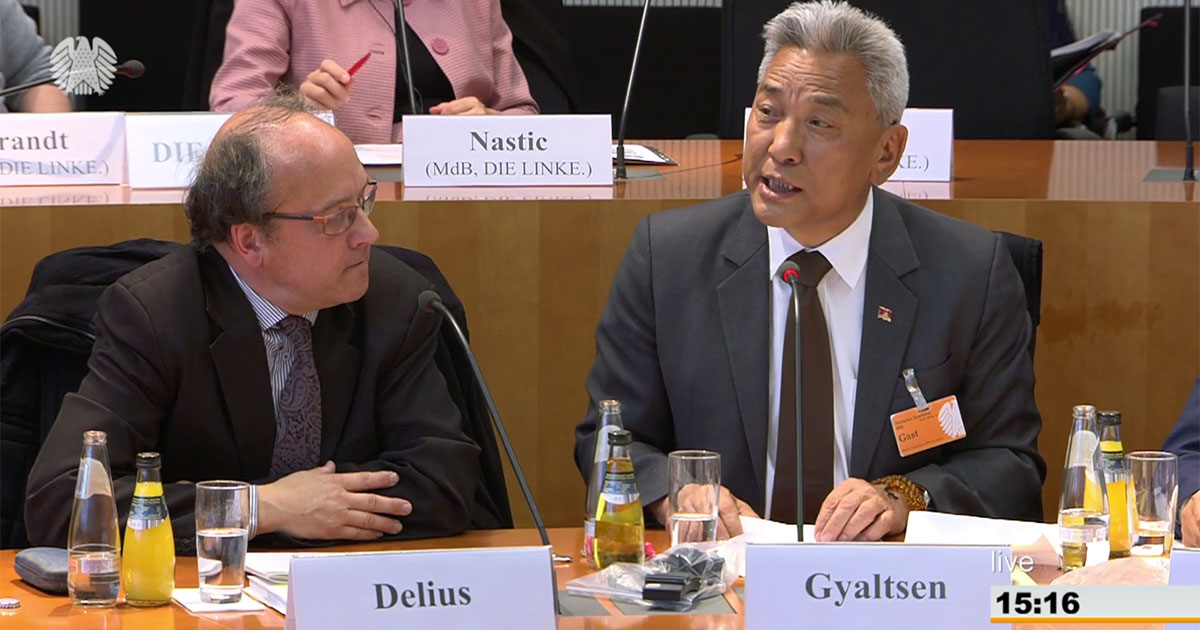 Former Special Representative of His Holiness the Dalai Lama to Europe Kelsang Gyaltsen speaks at a hearing in the German Bundestag.

China wants to destroy the core of Tibetan identity and replace Tibetan culture and religion with a state-approved and controlled version, Kelsang Gyaltsen, the former Special Representative of His Holiness the Dalai Lama to Europe said at a hearing in the German Bundestag in Berlin on May 8, 2019.

Gyaltsen was speaking as an expert on the situation of Tibetan Buddhism in a hearing called “Religious Freedom: The human rights situation of religious minorities in China” in the Committee on Human Rights and Humanitarian Aid of the Bundestag.

Gyaltsen also touched on the issue of the succession of the Dalai Lama and said China does not have the authority to decide it. He said German politicians should make it clear they would not recognize a Dalai Lama appointed by the Chinese government.

He criticized “the comprehensive monitoring of monasteries by party cadres, police and technology” and the “religious and security laws that make virtually every religious activity dependent on the permission of the authorities.” He also referred to “prohibitions on visiting temples, closing monastery schools, denigrating the Dalai Lama and long-term sentences for Tibetans who publicly worship him.” These repressive measures are accompanied by comprehensive and rigorous ideological campaigns, Gyaltsen said.

In a reply to a questionnaire from the Bundestag factions, Gyaltsen called on German policymakers to “understand the issue of human rights and the rights of religious and ethnic groups such as the Tibetans and Uyghurs as a central component of their relations with the People’s Republic of China and the Chinese government, both bilaterally and multilaterally, publicly and non-publicly.”

He said the situation of Tibetans, Uyghurs, Mongols, etc., is indicative of the Chinese government’s disrespect for international legal norms and unwillingness to follow principles of peaceful conflict resolution. He suggested the situation in Tibet and other regions should be followed with particular attention by German politics.

Regarding Tibet, Gyaltsen said German policymakers should emphasize the worsening human rights situation and call for change. It should call on the Chinese government to resume dialogue with representatives of the Dalai Lama, he said.

Moreover, Gyaltsen said, the positioning of the German government regarding the succession of the Dalai Lama is of critical importance. Such a decision is to be taken solely by the institutions of Tibetan Buddhism in a free and self-determined manner and without the interference of the Chinese government or the Chinese Communist Party, he added.

Others who testified at the Bundestag hearing included Ulrich Delius of the Society for Threatened People; Wenzel Michalski, director of Human Rights Watch in Germany; Dolkun Isa, president of the World Uyghur Congress; and Prof. Frank N. Pieke of the Mercator Institute for China Studies.