By International Campaign for Tibet|July 25, 2016| A picture of Larung Gar at night. Chinese authorities have begun demolishing the homes of monks and nuns at this sprawling Tibetan Buddhist religious institution.

The demolitions, which are expected to continue this week, were outlined in an order issued by the county government – which also gave no indication that Larung Gar’s religious leaders had any involvement in the process of decision-making. The order stated that homes for all but 5,000 monks, nuns and laypeople would be demolished, and that “By September 30, 2017 the population of the encampment must be limited to 5,000 persons” (translated into English by Human Rights Watch).[1] The population of Larung Gar is believed to be at least 10,000, consisting of monks, nuns and laypeople who attend teachings. There are students of the teachers at Larung Gar across the world, in China, India, and the West as well as in different areas of Tibet. 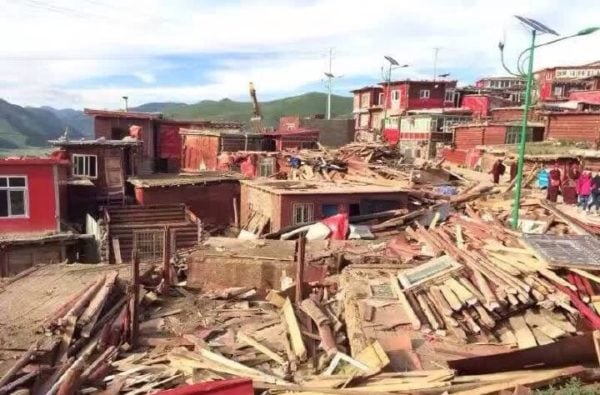 The dismantling of some wooden huts began prior to demolition, and images circulated on social media of mechanical diggers and workmen clearing away the destroyed homes, as monks look on. The authorities are believed to have marked out on a map the areas where homes are permitted, and those areas where they will be demolished. One of the signs, in Chinese and Tibetan, stated that it was a ‘construction’ site, not a demolition site.

Larung Gar has become increasingly prominent in recent years, and since the demolitions of 2001, as one of the most important centers of Tibetan Buddhism worldwide. It first pioneered its revival in the early years of relative liberalization in the 1980s, following the destruction and chaos of the Cultural Revolution. One of the Khenpos (abbots) of Larung Gar, Khenpo Sodargye, who has over 1.5 million followers on Chinese social media Weibo, became the first Buddhist monk to be featured on a major Chinese magazine cover in 2014.[2] Khenpo Sodargye has also given lectures about Tibetan Buddhism at prominent institutions including Beijing University and Qinghua University. Chinese bloggers have posted images and accounts of their visits to Larung Gar over the years, acclaiming it as a place “one must visit in a lifetime”,[3] and it has been the subject of major profiles in the international media.[4]

China’s President and Party Secretary Xi Jinping is said to have taken some personal interest in the center, according to Tibetan sources, which may be one of the factors involved in the determination to follow through with the demolitions. One of the prominent Tibetan lamas at the institute, Khenpo Tsultrim Lodroe, diverted from a religious teaching earlier this month to speak at length about the demolitions to monks and nuns, saying that residents of Larung Gar should keep calm and focus on their Buddhist studies. Acknowledging that it is a “critical moment” for the Institute, he urged monks and nuns to continue with their religious practice and not to focus on the demolition of physical buildings, as it is the long-term survival of the religious institute that matters. He said that Larung Gar’s importance was not under any doubt, as it is a “monastery for the world” which has been beneficial to so many.

According to the order, which gave no reason for the demolitions other than ‘correction and rectification obligations’, around 1400 houses are marked for demolition this month, with nuns’ homes and elderly people’s hostels among the first wave to be destroyed. The order states: “Residences of those expelled since 2013, illegal new residences, residences that have become old age homes and nuns’ hostels, a total of 1,500, will be demolished at one go [prior to October 2016].”

In the demolitions of 2001, nuns’ homes were particularly targeted; Larung Gar and another encampment in Kardze, Yachen Gar, have become particularly important centers for nuns to train in meditation and Buddhist practice.

Matteo Mecacci, President of the International Campaign for Tibet, said: “These demolitions are part of a set of policy measures implemented by the Chinese government that severely restrict the religious freedom of Tibetan Buddhists. This is a regressive and dangerous approach aimed at managing and controlling Tibetan Buddhism that sends a chilling signal to the outside world about the pressures faced by people seeking to peacefully practice their religion in the PRC. Larung Gar is a living, vital center of Tibetan Buddhist teachings that is renowned worldwide and across China. It is of immeasurable importance in terms of Tibetan language, culture and religion as well as for a new generation of Chinese Buddhist scholars and pilgrims. As such it should be treasured and protected, and its religious teachers must be fully engaged in decision-making on its long-term future.”

Last month, a county official denied Larung Gar’s destruction, saying that it was part of attempts to build a “more orderly, beautiful” land. Palkho, the Serthar County United Front Work Department Secretary, said that: “Online it has been said that ‘Larung Gar will be demolished,’ ‘it’s the end of Larung Gar,’ ‘the monks and nuns will be removed,’ ‘the authorities are destroying and sweeping away a holy religious place,’ and so on. This is totally untrue, and irresponsible.” Palkho added that: “In this year Lo-Nor Township is being upgraded to a town, and because Larung Gar monastery is close to Lo-Nor township it will naturally be integrated into the overall planning and construction.” Using official language that avoids making any reference to buildings being demolished, Palkho was cited as saying: “The motivation of this construction development is to build a more orderly, beautiful, secure and peaceful land where people can practice peace of mind, study more precisely, and allow the elderly to live more comfortably, and at the same time accelerate the pace of urbanization and development in Lo-Nor town.”[5] Palkho’s comments are consistent with the Kardze prefectural drive to attract business and promote tourism to the area, which has involved inviting diplomats and journalists on propaganda visits in recent months.[6] Diplomats from several countries including the UK, Canada, Germany, Australia and Poland travelled to Kardze (the Tibetan area of Kham) last month, and were photographed at Lithang (Chinese: Litang) monastery, an area where the crackdown has been particularly intense and ‘patriotic education’ campaigns stepped up. Their visit was close to the one-year anniversary of the death in prison of prominent and much-loved monk Tenzin Delek Rinpoche, who was born in Lithang and studied at the monastery.[7]

A Thai diplomat on the trip was cited by the Chinese state media during the visit as saying that he was impressed by the efforts made by the authorities to maintain and rebuild historic Buddhist architecture, and its ‘cultural heritage’ initiatives.[8]

Larung Gar was founded by the late Khenpo Jigme Phuntsok to provide a training center for Tibetan Buddhism and to meet the need for renewal of meditation and scholarship all over Tibet in the wake of China’s Cultural Revolution. It began as a handful of students studying with the Khenpo, to later become one of the most influential and important Buddhist institutions worldwide; by 2002 it had over 8,000 disciples, including a sizable Chinese population.

The late Khenpo Jigme Phuntsok had also traveled extensively within China, giving Buddhist teachings in Beijing, Guangzhou, and Shenzhen. His students are now in China, India and the West.[9]

Almost no notice was given of demolitions in 2001, with footage reaching the outside world of Chinese workers dismantling the monks’ and nuns’ homes, reducing them to chipwood, then taking the wood away to prevent rebuilding. According to witnesses in 2001: “The huts were demolished with all household possessions and shrines still inside. The workers dragged out invalids and elderly residents, sometimes even dismantling roofs while the owners were still inside.”[10]

The demolitions were on a scale not witnessed since the Cultural Revolution, and all Chinese students were evicted. During this time, Khenpo Jigme Phuntsok’s health deteriorated and he moved between hospitals in Barkham (Ch: Ma’erkang) and Chengdu for medical care. He died on January 7, 2004. The emergence of monastic encampments like Larung Gar (‘chögars’ in Tibetan) in eastern Tibet created a new space for Tibetans to practice Buddhism in a climate of intensifying religious repression. These monastic centers, of which Larung Gar is the most prominent, are an increasingly important means of ensuring the continuity of Tibetan Buddhist lineage and activities, and strengthening cultural identity for many Tibetans.

Teachings at Larung Gar and other such encampments revitalized Tibetan Buddhist contemplation and scholarship. The high standard of religious education and traditional Buddhist instruction offered by qualified teachers has attracted more and more monks, nuns and laypeople from both Tibetan areas and from China itself, reflecting an increasing Chinese interest in Tibetan Buddhism.

[2] Ren Wu Zhou Kan (People Weekly), published on May 12, 2014. The issue featured articles on Khenpo Sodargye, one on his life titled Khenpo Sodargye, ‘The Master Out from The Mountains’ about how a young shepherd becomes a great Tibetan Buddhist teacher to millions of students, with over 1.5 million followers on Weibo. The second article is titled, “A Dialogue with Khenpo Sodarjee” and Khenpo answers various questions on Buddhist practice, modern life and Buddhist practice and social life and Buddhism. Khenpo Sodargye has also given lectures about Tibetan Buddhism at prominent institutions including Beijing University and Qinghua University.

[5] Translated into English by ICT, from a Chinese county level website: http://www.ganzixinwen.com/wh/kzrw/zxzj/n9662.html

[6] For instance, see the promotion of Kardze at the Shenzhen International Cultural Industries Fair: http://www.prnewswire.com/news-releases/charming-ganzi-tibetan-autonomous-prefecture-welcomes-global-investors-and-visitors-to-ganzi-at-the-12th-china-shenzhen-international-cultural-industries-fair-300269615.html

[10] Compilation of reports by TCHRD, Tibet Information Network, news wires and others: http://www.reversespins.com/tibetdemolition.html