Monk in Tibet sets himself on fire; shot by police during protest

By International Campaign for Tibet|February 27, 2009| 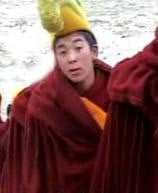 Tapey, a Kirti monk in his mid-twenties, was shot by security personnel when he set himself on fire as a form of protest after prayer ceremonies.

A Kirti monk in his mid-twenties was shot today by security personnel when he set himself on fire as a form of protest after prayer ceremonies at his monastery were cancelled, according to several sources in the area. It is not known if the monk, Tapey, is still alive as he was surrounded by police after he fell to the ground. He had been holding a home-made Tibetan flag that had at its center a photograph of the Dalai Lama.

According to at least three sources in contact with people in Ngaba (Chinese: Aba) in Sichuan province (the Tibetan area of Amdo), earlier today, monks at Kirti Monastery were told by the local authorities that they were not allowed to observe Monlam, a traditional prayer festival that is held after Tibetan New Year (Losar).

It is not known why the authorities issued this order, but it is consistent with other provocative official moves that are deepening tension in Tibet. Despite this order, hundreds of Kirti monks gathered outside Kirti’s prayer hall to go ahead with the prayers. But they were urged to stop by senior monks and some local officials who feared adverse consequences, according to the same sources, which include monks from the Kirti monastery in exile in Dharamsala, India. The monks then dispersed, but Tapey then left the monastery.

Early in the afternoon, according to at least two sources including one who spoke to an eyewitness, Tapey walked alone to a nearby crossroads in the market area of the town. He had already doused himself with oil by the time he reached the crossroads. He then set himself on fire and raised a home-made Tibetan flag that had at its center a photograph of the Dalai Lama. When Tapey began to shout slogans (no details are yet known of what he said), People’s Armed Police (PAP) personnel stationed nearby opened fire, and Tapey fell to the ground. Reports indicate that the fire was extinguished by the PAP after Tapey was shot and he was immediately taken away by police. It is not known if he survived. Reports from the area indicate that monks are carrying out prayer rituals for him.

The crackdown in Ngaba has been particularly severe following a major protest involving monks from Kirti monastery on March 16 last year, and the presence of troops in the area has been stepped up more recently. At least 10 Tibetans – including 16 year old schoolgirl Lhundup Tso – were shot dead last year after police opened fire on unarmed Tibetans who joined the spontaneous protest after a morning prayer session at Kirti monastery on March 16, 2008.

Many more monks and laypeople were detained, tortured or ‘disappeared’ since then, and during police raids on their monastery photographs of the Dalai Lama and senior religious leaders were destroyed. In recent months foreigners have been blocked from entering Ngaba.