Monk sentenced to 3 years in prison, possibly for contacting people outside Tibet

By International Campaign for Tibet|September 6, 2019| 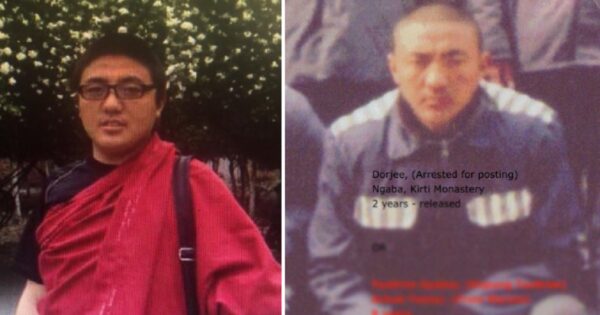 Tibetan monk Lobsang Dorje has been sentenced to three years in prison.

A Tibetan monk from the influential Kirti monastery was sentenced to three years in prison this week after being held incommunicado in detention for more than one year.

Lobsang Dorje, aged about 36, was sentenced on Sept. 3 after being arrested in his room in mid-July 2018.

According to Lobsang Yeshe and Kanyag Tsering, two Kirti monks living in exile in India, it is not known why Lobsang Dorje was imprisoned, although they have heard it may be linked to his contacts with people outside Tibet.

Chinese authorities have taken an extreme approach to blocking information flow and preventing news about Tibet from reaching the outside world. As a result, Tibetans in Tibet can be imprisoned for simply sharing even fragments of news with other Tibetans.

This is the second prison sentence for Lobsang Dorje in about a decade. His first imprisonment was in 2008 for refusing to comply with Chinese officials running a “patriotic education” campaign at his monastery, located in Ngaba (Chinese: Aba) in Ngaba Tibetan and Qiang Autonomous Prefecture, Sichuan, in the Tibetan area of Amdo.

Lobsang Dorje and another monk named Kunga were initially detained on May 23, 2008 and sentenced to two years in prison. According to the Tibetan Centre for Human Rights and Democracy (TCHRD), their monastery had been under a brutal crackdown following protests two months earlier.

Citing an eyewitness source, TCHRD reported today: “The defiance shown by the monks symbolised their determination to choose imprisonment over capitulation.”

The exile monks have circulated an image that was taken in prison of Lobsang Dorje, who is from a rural area of Ngaba. He is the son of Sangrin from the Chukle Gabma pastoral area of Ngaba.

Last month, the International Campaign for Tibet had reported on the disappearance and imprisonment of two other monks from Ngaba in eastern Tibet, which has been subject to a brutal crackdown by the Chinese government since the wave of Tibetan self-immolations began there in 2009.

ICT and Tibetan media had previously reported that Lobsang Dorje had been arrested in 2011 and sentenced to three years in prison. The two Kirti monks in exile have now confirmed that his first arrest was in 2008, with a temporary detention in 2011 following his release from his two-year sentence.