New ‘defense’ villages and infrastructure being built on Tibet’s border

By International Campaign for Tibet|December 23, 2019| 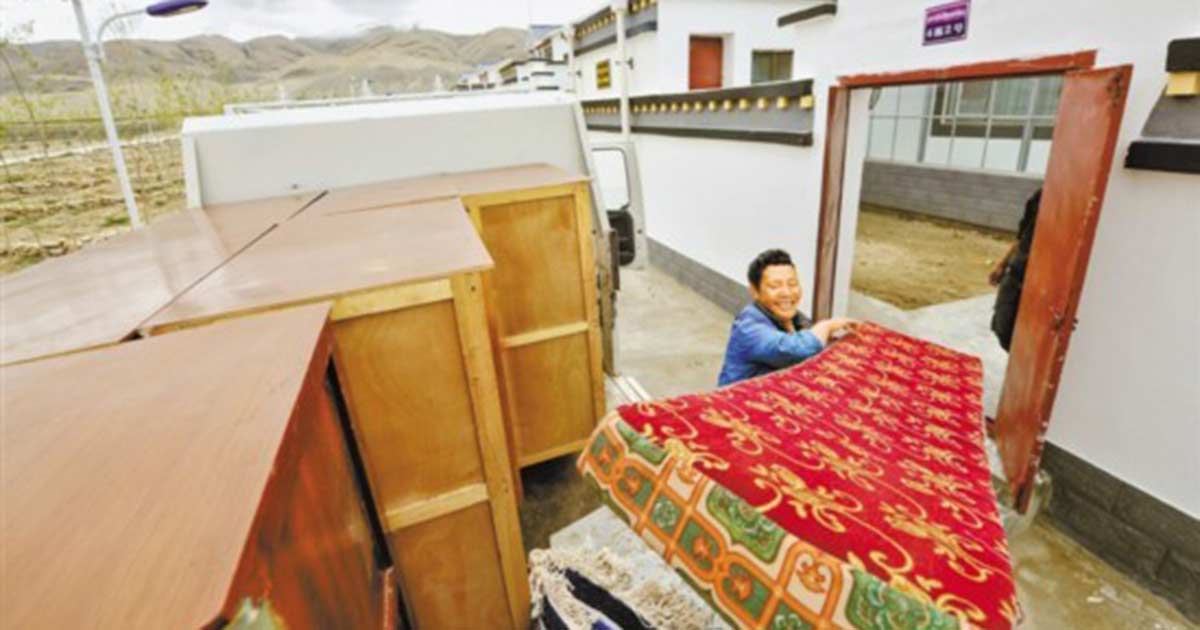 Image from the Chinese state media showing a family moving into a house in Demchog, a new “xiaogang” border defense village, in August, 2019.

Wu Yingjie, the CCP chief of the Tibet Autonomous Region (TAR), has said that “Tibet is a special frontier ethnic region” and “an important national security and ecological security barrier.”[1] Wu’s comment reflects Chinese authorities’ increasing emphasis on infrastructure development and militarization on the borders of Tibet, as outlined by Chairman Xi Jinping when he said, “To govern the country well we must first govern the frontiers well, and to govern the frontiers well, we must first ensure stability in Tibet.”[2]

Tibet, a historically independent country in the Himalayan region, was annexed by Chinese troops 60 years ago and is brutally occupied to this day.

According to the “Plan for the Construction of Well-off Villages in the Border Areas of the Tibet Autonomous Region (2017-2020),” issued in 2017, more than 600 “well-off” (Chinese: xiaokang) border defense villages will be constructed.[3]

At the celebrations marking the 70th anniversary of the founding of the People’s Republic of China in October 2019, Wu—who also heads the Border Defense Committee of the TAR—announced the acceleration of construction of the border villages.

According to Chinese state media, the plan is to construct 624 such villages in Tibetan border areas.[4] Most of the construction is taking place in the key border areas of Nyingtri (Ch: Linzhi, also rendered in English by Chinese sources as Nyingchi)—which borders India’s Arunachal Pradesh state—Ngari (Ch: Ali) and Shigatse (Ch: Rikaze)[5].

The sites of the new “well-off,” border defense villages are often remote and sparsely populated and are on the routes that Tibetans once took to escape into exile into Nepal and then India.

CCP cadres, paid more than their counterparts elsewhere,[6] will be transferred to each village and there have been intensive political education sessions in border areas as part of their efforts to undermine and eliminate the Dalai Lama’s influence, such as the training of monks in Nyingtri, on countering “espionage activities by the Dalai Lama”. The Global Times cited Penpa Lhamo, deputy head of the contemporary studies institute of the Tibet Academy of Sciences, as saying that this was important because: “Nyingchi is of special importance to anti-espionage efforts because there are many military sites.”[7]

Talking about a new model village called Demchog (Ch: Dianjiao) in Gar county near the Indian border in the western Tibetan region of Ngari, Zhu Hong, head of the organization department of the Gar County Committee, said: “Our goal is to build Demchog Village into a party-building position and an indestructible battle fortress led by demonstrations on the border, keep the gate for the motherland, let the people live in peace, and make everyone a guardian of sacred land and happiness.”[9]

The new developments were also heralded in a letter Xi sent to two sisters from a herding family in a remote Tibetan area close to the border soon after the 19th Communist Party Congress in Beijing in 2017. Xi encouraged the family “to set down roots in the border area, safeguard the Chinese territory and develop their hometown,” according to state news agency Xinhua.[10]

The enthusiastic promotion of the new border villages seems at least in part intended to demonstrate and underline the loyalty of leaders and officials in Tibetan areas to the CPC leadership.

The new settlements and infrastructure also underline the core policy of military and civilian integration in Tibet, a priority of the CCP. Analysts have pointed out that the role of People’s Liberation Army (PLA) political commissars has been expanded to include research across the border into India while Party officials posted in “border defence villages” are also involved in political work, building relationships and influence on the Indian and Nepalese sides of the border.[11]

New bridge, tunnel and airports in strategic infrastructure network at the border

Chinese state media also announced the completion of a bridge and tunnel last month on the strategically important Lhasa to Nyingtri section of the “Sichuan-Tibet” railway, which Chinese engineers have described as the “world’s riskiest” rail connection. The route is of key geopolitical significance, and despite scientists’ warnings of untold environmental consequences and risks of earthquakes and other disasters, it is considered a priority at the highest political levels in China.

Xi has emphasized the Chengdu-Lhasa rail link’s importance in relation to securing the border. In November, workers completed the joining of the Bayul Bridge for the railway across the Yarlung Tsangpo River (which is the upper reaches of the Brahmaputra River).[12] They also completed the 13,073 meter Bayul Tunnel.[13]

The Lhasa-Nyingtri section of the line is part of a second, 1,700-km rail route linking Tibet to the China (following the opening of the line from Golmud in Qinghai in 2006), connecting Lhasa to the Sichuan provincial capital of Chengdu. Tian Yun, director of the China Society of Macroeconomics Research Center, said: “When the railway is completed, it will be easier to ensure the security of the Tibet Autonomous Region by logistics from Sichuan.”[14]

The Chinese government also announced that it will start construction of three new airports in the TAR in 2019 (in addition to the five that are currently there).[15] China has announced that its airports are being integrated both for civilian and military uses.[16] At the ceremony announcing the new airports, the Commander of the Tibet Military District and three other PLA officers were present, indicating the airports’ military importance.[17]

Two of the new airports are located in Lhokha (Ch: Shannan), north of Tawang, Arunachal Pradesh in India, and in Purang (Ch: Burang) in Ngari near the trijunction of Nepal, Tibet and India. The third airport will be at Tingri (Ch: Dingri), near the Nepal border.