By International Campaign for Tibet|March 29, 2008| 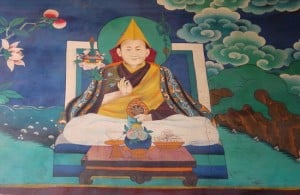 A hidden mural of the Dalai Lama in Lhasa. The Chinese authorities’ virulent rhetoric against the Dalai Lama and heavy-handed imposition of religious restrictions are significant factors in the wave of protests in Tibet today. (ICT)

Despite the military crackdown and high levels of fear and intimidation in Lhasa, new unrest broke out today in the Barkhor area of the capital after armed police moved into the area in force.

Although full details could not be confirmed, reliable reports indicated that a new protest occurred involving many Tibetans, possibly linked to an attempt by armed police to detain Tibetans in the Tibetan neighborhood around the Ramoche and Jokhang temples in central Lhasa.

Panic and fear broke out on Saturday afternoon (March 29) after armed police moved in to check the identity papers of people in the area where rioting began on March 14, according to reliable sources. A “melee” broke out and people “started running in all directions, and shouting”. Tibetan shops in the area were closed down, and armed police surrounded the areas around the Ramoche and Jokhang temples. According to several other reports, more Tibetans staged a peaceful protest.

According to several sources, a text message sent to cellphone users in Lhasa yesterday afternoon by the Lhasa Municipal Police confirmed the security checks and climate of fear, as well as warning citizens to “obey the law”. A translation of the text message sent to ICT said: “On the afternoon of 29th in our city, as the security department were carrying out checks, this caused some frightened citizens whose identification [documents] are not clear to run away…Please obey the law and please follow the rules, don’t create rumors, don’t believe rumors…”

The incident occurred as a 15-member group of diplomats from countries including the USA, Japan, and Slovenia were leaving Lhasa after a stage-managed and controlled visit at the invitation of the Chinese government. It appears the diplomats left Lhasa just prior to the protests and unrest, and before the authorities tightened security still further in the Jokhang area. Embassies contacted by phone indicated that the foreign visitors had not witnessed any unrest during the visit. It is not clear whether the protest was linked to the visit of the diplomats, whose movements were tightly restricted by the authorities; some ICT sources indicated that Tibetans were aware of the delegation’s presence in Lhasa.

On Thursday, images of monks from the Jokhang temple speaking in open defiance of the crackdown to journalists about the lack of religious freedom in Tibet were broadcast around the world. The current whereabouts of the monks is unknown.