By International Campaign for Tibet|January 30, 2015|
A listing of the top news developments in and around Tibet during the previous week.

Over a dozen Communist Party officials in the Tibet Autonomous Region have been punished for taking part in ‘separatist’ activities linked to the Dalai Lama Clique, according to the Chinese state media. In Qinghai, some Party members were similarly penalized for being involved in “Tibet-related instability” following scrutiny by a disciplinary official work team linked to Xi Jinping’s politicized drive against corruption, according to another report in the state media. These developments follow stern warnings of “punishment” for Tibetans “who have fantasies about the 14th Dalai Clique”, effectively acknowledging the Chinese authorities’ failure to eradicate loyalty to the religious leader in exile, even among Party members. For more please see our full report. 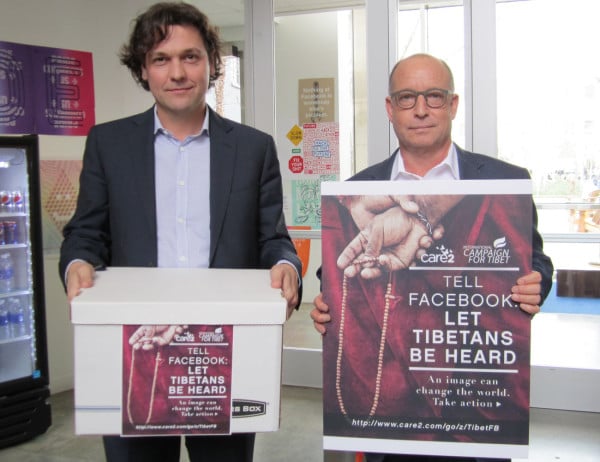 ICT President Matteo Mecacci and Care2 Vice President Joe Baker visited the headquarters of Facebook on January 27, 2015 and delivered 20,449 signed copies of a petition addressed to Facebook CEO Mark Zuckerberg on the right of Tibetan voices to be heard on the social network forum without censorship. “The petition was endorsed by more than 20,000 people from over 68 countries and we were able to share with Facebook their feeling that such actions to silence Tibetan voices cannot be tolerated,” said Matteo Mecacci, president of ICT.

The package was accepted by a Facebook official who did not make any comments. For more please see our report. After a cultural shift in Tibet against the use of wild animal pelts since the Dalai Lama called for Tibetans to abandon the habit of wearing them in 2006, Tibetan netizens have expressed outrage at images of some delegates to important Communist Party meetings wearing the pelts of protected species. One Tibetan noted that many of the delegates “were wearing animal skins such as otters, leopards, lynx, tigers, fox, which are meant to be protected by the national laws.” But Chinese authorities have encouraged Tibetans to wear furs to showcase “exotic” Tibetan culture, including the encouragement or requirement of Tibetans at official events or performances to adorn themselves with expensive hats and robes made of pelts from endangered animals. For more please see our report. Where does the Tibet movement stand now?

The Dalai Lama recently mentioned that the hardliners in China are not allowing Chinese President Xi Jinping to grant autonomy to Tibet. Is that how you look at it?

What His Holiness is saying is that the hardliners in China continue to maintain hardline policies, but they have to realize that hardline policies on Tibet are not working. Because wherever there is repression there will be reaction and protest. Repressive policies are not working, that’s why we are here today talking about Tibet even now. If occupation and repression were the solution then the Tibet issue could have been solved a long time ago. But no, even after fifty years we are still talking about it. Hence repression is never a solution. Liberal policies are the solution. So the hardline leaders are wrong on this issue yet they continue to maintain that their policies might work and they think that depriving Tibetans of genuine autonomy could lead to a long-term solution, which is not likely to be the case.

For the rest of the interview, please click here. Sources inside Tibet have informed The Tibet Post that Tsewang, a monk from Sog county in the Nagchu region, has been sentenced to ten years in prison for allegedly inciting a protest. Local sources say that he was one of four monks from the region detained almost a year ago and held since then, and that the status of the other detained Tibetans remains unknown.

Meanwhile, Radio Free Asia has been following a situation in nearby Jyekundo in which eight Tibetans have been detained. Jyekundo, which was leveled by an earthquake in 2010, has been the focus of intense rebuilding efforts resulting in conflicts over forced evictions and expensive government-directed redevelopment strategies. The detained Tibetans were occupants of state-built housing resisted moves to evict them from their homes, sources told RFA.