John Ackerly was the President of ICT for 10 years and a founding staff member of ICT. John first went to Tibet in 1987 as a mountaineer and met Galen in 1988. John helped Galen with some of his Tibet publications and climbed with him numerous times in Yosemite Valley.

Conrad Anker is a professional mountain climber who has climbed extensively in the Himalayas and Tibet. He accompanied Galen on their last expedition together in Tibet in the summer of 2002. He is also a board member of the Conservation Alliance and the Alex Lowe Charitable Foundation. When not climbing, he lives in Bozeman, Montana, with his wife Jenny and three kids.

Justin Black is the General Manager of Galen and Barbara Rowell’s Mountain Light Photography, featuring a gallery, photography workshop program and stock image collection in Bishop, California. Justin was a photographer, picture researcher, and licensing specialist prior to joining Mountain Light in 1999. He worked closely with Galen and Barbara in every aspect of their professional lives and shares their commitment to Tibetan sovereignty, culture, and ecology.

David Breashears is an accomplished climber, mountaineer and cinematographer, who has summited Everest four times. He worked on Seven Years in Tibet and produced the documentary Red Flag Over Tibet in 1991. He has received four Emmy awards for cinematography and made the Everest IMAX film. David was close friends with Barbara Rowell and lives in Boston, MA. David is the Co-chair of the International Campaign for Tibet’s Board of Advisors.

Jimmy Chin is a photojournalist and an adventure sports photographer. His photographic assignments have taken him everywhere from remote alpine walls in the Karakoram, to the Chang Tang in Tibet. His photos have appeared in National Geographic Adventure, Climbing Magazine and Outside Magazine. He accompanied Galen, Rick Ridgeway and Conrad Anker in 2002 to Tibet on a grueling expedition to find the birthing ground of the endangered Tibetan antelope, the chiru. He lives in Jackson, Wyoming.

Beth and Bob Cushman are both active on the Board of Mountain Light and are raising their two daughters in Truckee, CA. Bob is Barbara’s brother and director of the Squaw Valley Ski Patrol. Bob accompanied Barbara and Galen on a National Geographic sponsored trip to Nepal in 1987 to the Annapurna sanctuary. He also accompanied Barbara and Galen on their flying adventure to South America that resulted in Barbara’s recent book “Flying South: A Pilot’s Inner Journey.” Beth is a fourth grade teacher and has traveled extensively in India and Nepal.

John Jancik is President of ECHO Geophysical Corporation in Denver, Colorado and a long time supporter of environmental causes. He was a teammate of Galen and Bob Palais on the 1996 Top Of The World Expedition to the northernmost point of land on Earth off of the north coast of Greenland. In addition, John co-authored the book “Under The Midnight Sun” which featured numerous photographs of Galen’s work.

Bob Palais is an Associate Professor of Math at the University of Utah and a long-time mountaineer and Tibet activist. He met Galen in the early 1980s in Yosemite and then became good friends during the Endangered Tibet Conference in 1990 and they undertook several expeditions together including a trip to the northernmost point of Greenland in 1994.

Tony Rowell and his sister Nicole Rowell Ryan were founding members of the Rowell Fund Board of Advisors. They were the adult children of Galen Rowell and after their father’s passing did much to keep his memory and photos alive through his photo studio Mountain Light. Nicole passed away in 2018 and Tony in early 2019.

ICT remembers them both fondly and with great respect for all they did to help the Tibetan people. To read ICT’s remembrance of Nicole please follow this link.

ICT’s remembrance of Tony is below. 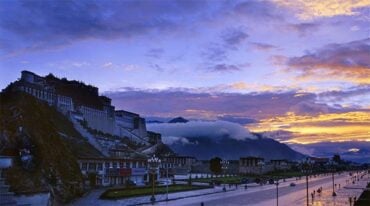 Potala Palace at sunrise captured by Tony Rowell in 2004

It is with deepest sorror that ICT and the Rowell Fund for Tibet announce the passing of Tony (Edward Anthony) Rowell on February 16, 2019, at the age of 50.

Tony was part of the ICT family since 2003 when he, along with former ICT President and active Board Member John Ackerly, helped develop the Rowell Fund in honor of his late father Galen Rowell, a famed photographer and mountaineer, and his wife Barbara, who were avid supporters of the Tibetan cause. Tony became very instrumental in the success of the Rowell Fund over the years. Following in his father’s footsteps, Tony traveled to Tibet in August 2004 with National Geographic Expeditions, and has donated his photos from the trip to ICT. He was a passionate photographer of natural landscapes and the night sky.

John Ackerly shares, “Tony was a great advocate for Tibet and the Rowell Fund for Tibet, which he helped to co-found. Galen shot his photos quickly during the mountain light, in the early morning and late afternoon, while Tony had the patience to leave the shutter open for minutes or hours, captureing the distant stars and pondering the universe. Like meteors, they both came and went far too quickly.”