By International Campaign for Tibet|June 7, 2021|

In the latest World Heritage Watch Report, the International Campaign for Tibet calls for the first time for designating the UNESCO protected “Historical Ensemble of the Potala Palace,” part of which is Lhasa’s 1,300 year-old Jokhang temple, as a World Heritage in Danger.

The 2021 World Heritage Watch report, published on June 6, includes analysis from ICT that documents the construction of two new Chinese-style pavilions in front of the Jokhang, the most sacred temple in Tibet. Construction on the pavilions began during a three-month coronavirus lockdown. 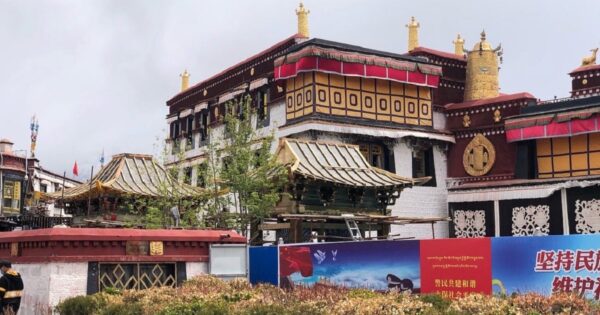 In addition to these new pavilions—which obstruct the entrance of the Jokhang and stand in stark contrast to the Tibetan architecture of the surrounding buildings—ICT highlights multiple other examples of mismanagement at the site. These include the construction of two large shopping malls in old town Lhasa and the inadequate response to the 2018 Jokhang temple fire. 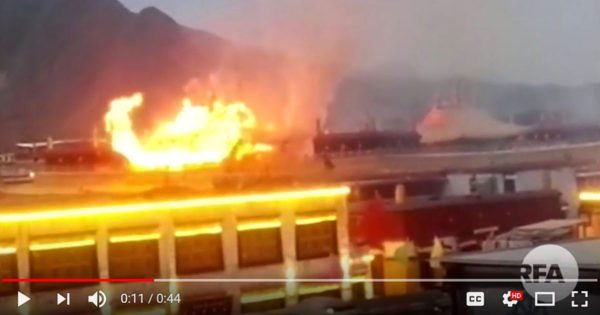 Screen grab from video on social media of the Jokhang Temple fire.

The report also reveals fundamental failures of heritage management, such as the failure to provide clear boundaries of the heritage site for 18 years and the absence of a conservation plan for 14 years.

World Heritage Watch is an NGO working with over 150 groups worldwide to prevent world heritage destruction due to political and economic interests. Their annual report alerts the international community to imminent threats and risks to world heritage.

The World Heritage Committee will meet in July to review the management of the Historical Ensemble of the Potala Palace. ICT recommends the committee consider inscribing the site as a World Heritage in Danger, as the site satisfies more than one of the requirements outlined in paragraph 179 of the Operational Guidelines.

With a goal to protect Tibet’s cultural heritage, ICT welcomes efforts by the committee to promote greater transparency through the publication of legitimate restoration and conservation plans, as well as programs for community consultation and inclusion.

“The Chinese authorities have demonstrated that they are neither capable nor interested in adequately protecting the cultural and religious heritage of Tibetans. They have consistently failed to meet the basic requirements to demonstrate competent management. The request for a clear definition of the heritage boundaries has been outstanding for 18 years, and a heritage conservation plan is overdue by 14 years. It is time that the committee seriously review China’s management record and place the site on the list of heritage sites in danger.”