By International Campaign for Tibet|January 22, 2020|

The first meeting of the European Parliament’s Tibet Interest Group since a new Parliament was elected took place today in Brussels.

The meeting brought together about 15 Members of the European Parliament or their assistants, as well as the International Campaign for Tibet’s Brussels team and Tashi Phuntsok, head of the Office of Tibet in Brussels. The Office of Tibet is an official agency of the Dalai Lama and the Central Tibetan Administration, which provides democratic governance for the Tibetan exile community.

MEP Molly Scott Cato, a long-term member of the TIG who generously took over leadership of the group during the transition period, welcomed the participants. She presented some of the TIG’s activities over the years before encouraging the members to continue pursuing its work. Cato, a British MEP, will soon leave the Parliament, as her mandate will end on Jan. 31 due to Brexit, the United Kingdom’s withdrawal from the European Union. 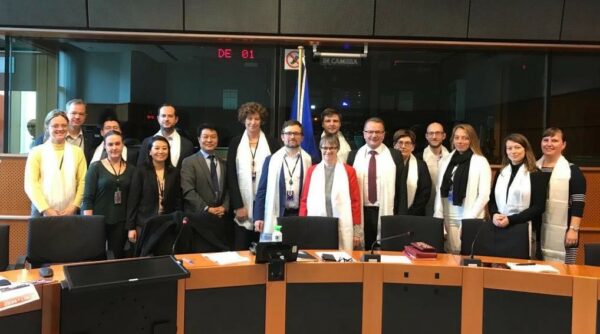 Some of the participants of the Tibet Interest Group meeting in the European Parliament on Jan. 22, 2020.

Cato then gave the floor to MEP Mikulas Peksa, who was unanimously nominated as the new president of the group. Peksa, a Greens/European Free Alliance MEP from the Czech Pirate Party, explained that in the face of the threats currently posed by the Chinese authoritarian regime, the Tibetan struggle for human rights and freedom is more relevant than ever and that the support of policymakers worldwide for Tibet remains deeply needed. He suggested that in addition to the usual activities of the group (such as initiating resolutions or hearings on Tibet and organizing conferences), the TIG could also aim at raising more awareness and understanding of the Tibetan people and culture through events like exhibitions and film screenings.

A number of MEPs then reaffirmed their support for the Tibetan people and their readiness to actively contribute to the group’s activities, and Tashi Phuntsok of the Office of Tibet suggested some events the group could organize this year.

The International Campaign for Tibet’s Vincent Metten also welcomed the new members of the group and its president and underlined the importance of the upcoming year for EU-China relations. Metten mentioned the many events planned for the year, such as the EU-China Human Rights dialogue, the EU-China Summit and the meetings between EU Member States and Chinese heads of states and governments in Leipzig, Germany in September.

Metten also announced that ICT’s Tibet Lobby Day would take place in Brussels in March and encouraged the MEPs to meet with the participants.

Sign up for ICT’s Tibet Lobby Day in Washington, DC.

ICT EU Policy Director Vincent Metten:
“ICT applauds the reestablishment of the Tibet Interest Group in this new parliamentary term. Although many friends of Tibet in the European Parliament have left following last year’s election, many new MEPs are showing serious motivation to be active supporters of the Tibetan people within the European Parliament. ICT will continue to assist the group in its activities, including by suggesting speakers for its meetings, parliamentary questions its members could table, as well as draft statements or motion for resolutions.”