More than 30 Tibetans imprisoned after protests in Sershul

By International Campaign for Tibet|January 6, 2020|

More than 30 Tibetan monks and laypeople were imprisoned for two weeks in a harsh crackdown in Sershul (Chinese: Shiqu) in eastern Tibet following the arrest of seven Tibetans there for protests in November.

The more than 30 local people were held in the town detention center from around Nov. 21 to Dec. 12, according to new information from Jampa Yonten, a former monk from Dza Wonpo monastery who now lives in exile.

Conditions in detention were harsh, and the Tibetans were given only tsampa (roasted barley flour) to eat.

According to the same source, the detained Tibetans had fallen under suspicion of the police for such reasons as keeping images of the Dalai Lama, having contacts with Tibetans outside Tibet, or demonstrating an uncooperative attitude toward officials. 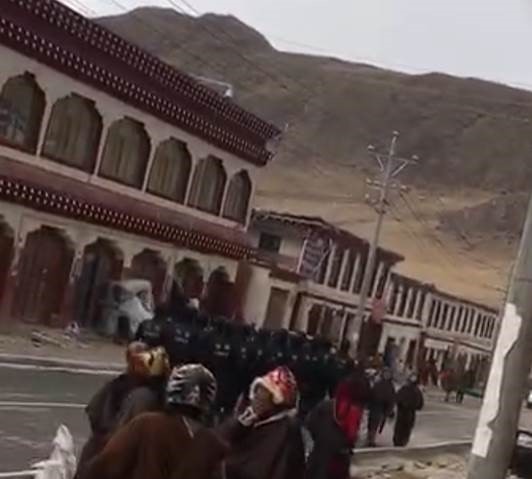 As part of the same crackdown, monks at the Dza Wonpo monastery were required to attend ideological Communist Party “education” sessions every day for more than two weeks.

While that happened, Chinese troops in riot gear held intimidating military drills in the town, which is in Kardze (Ganzi) Tibetan Autonomous Prefecture in Sichuan province

According to the source, local people’s homes were searched and their cellphones checked by authorities, with an unknown number interrogated by police and public security officials.

Tibetans in the town were also warned by officials that they would not be allowed to participate in the future in any “political” activities––a term the officials can define as they wish.

Those involved in the protests in November are all still in detention, and the protests were sparked by the expansion of an anti-Dalai Lama campaign targeted particularly at Tibetan nomads. 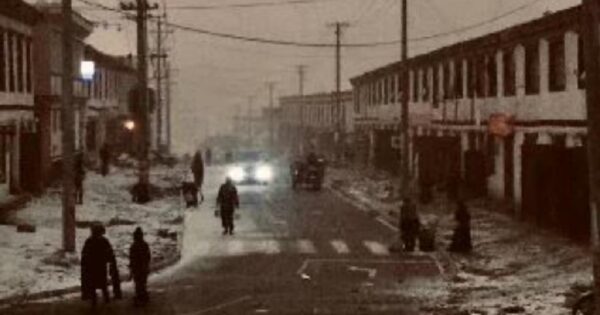 The main street of Wonpo in Sershul in late November following the protests and crackdown.

The monks from Dza Wonpo monastery, identified by exile sources as Kunsal, 20, Tsultrim, 18, Tamey, 18, and Soeta, 18, were detained by police after they scattered leaflets in the courtyard of the Chinese administrative office across the road from the monastery on Nov. 7.

Police later detained the monks’ religious instructor Shergyam Yang, a teacher at the monastery, but released him after 11 days.

Another monk named Nyime was taken into custody on Nov. 18 after posting online expressions of support for the actions of those in prison. Although earlier reports indicated he had been released, new information suggests he is still in custody.

Two weeks later on Nov. 21, two young Tibetan laymen named Choegyal (brother of Nyime) and Yonten were also arrested after they distributed leaflets in front of a police station in Dza Wonpo village and expressed their solidarity with the arrested monks in posts on the social media platform WeChat.

The two young men shot a video prior to the protest showing the Dalai Lama and leaflets with “Bod Rangzen” (a Tibetan phrase meaning independence for Tibet) written over and over again in red and black ink.

All seven Tibetans are still in custody, and their families and friends have been refused permission to see them.

According to Jampa Yonten, who is in touch with other Tibetans who know about the situation in the area, armed soldiers in riot gear held intimidating military drills in the township following the protests. This more overt military presence is believed to have been scaled back after Dec. 12.

Images received from the town show emptied streets and the presence of troops following the crackdown.

“The place has become like a ghost town,” said Jampa Yonten, who added that local people were frightened to leave their homes on account of the intense crackdown.

In the Sershul area, Tibetan nomads have been forced to settle and to reduce their livestock, which has increased poverty as government subsidies are insufficient for their living costs.

Compounding their distress, Chinese authorities have pressured local people to demonstrate their loyalty to the Communist Party, requiring them to remove images of the Dalai Lama, display pictures of Chinese Chairman Xi Jinping and other Chinese leaders, and make statements on camera for dissemination by state media.

General overview of the town, with Dza Wonpo monastery in the foreground.