By International Campaign for Tibet|June 19, 2015|
A listing of the top news developments in and around Tibet during the previous week. The Liberty Medal, which is awarded by the National Constitution Center, honors men and women of courage and conviction who strive to secure the blessings of liberty to people around the globe. His Holiness will visit Philadelphia in October to receive the award, which has been previously bestowed upon Malala Yousafzai, Sandra Day O’Connor, Kofi Annan, and Václav Havel, among others.

The hostile forces have colluded with the clique of the fourteenth Dalai Lama, and […] have tried all means to contend for the battlefield, popular feeling and the common people, thus, all their efforts have made Tibet the teeth of the storm in the struggle of the ideological realm.”

The report, ‘The teeth of the storm: Lack of freedom of expression and cultural resilience in Tibet’ shows how a new generation of Tibetans is paying a high price with their lives for peaceful expression of views in a political climate in which almost any expression of Tibetan identity or culture can be termed ‘criminal.’ It details the cases of 11 imprisoned writers and intellectuals and 10 singers who have faced persecution and imprisonment- please read it in full here. 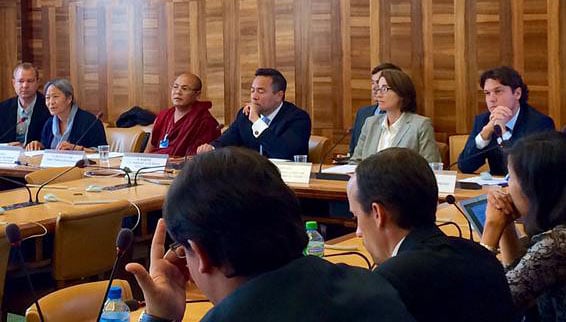 US Special Coordinator for Tibetan Issues Sarah Sewall and ICT President Matteo Mecacci joined other speakers to give remarks at the Helsinki Foundation for Human Rights’s side event, “Lockdown in Tibet“, on June 15, 2015. The event focused attention on several fundamental human rights issues facing Tibet today: namely, restrictions on freedom of expression and movement, which in turn have a significant impact on the ability of Tibetans to exercise other fundamental human rights. Sewall called for Tenzin Delek Rinpoche and other prisoners of conscience to be released, and for Dhondup Wangchen to be reunited with his family during her remarks, while Matteo Mecacci concluded by raising a series of questions for China- see his remarks in full here. ICT’s Elena Gaita making a Statement on Tibet on behalf of the Helsinki Foundation for Human Rights at the UN Human Rights Council session in Geneva on June 18, 2015.

In a statement responding to the report by Special Rapporteur on the promotion and protection of the right to freedom of opinion and expression, Ms. Elena Gaita urged the UN to ensure freedom of expression and opinion in Tibet. Ms. Gaita, who is the Policy and Advocacy Officer at the International Campaign for Tibet office in Brussels, said in her statement, “In the current political climate in Tibetan areas of the PRC, almost any expression of cultural or national identity can be characterized as ‘splittist’ and ‘criminal’ with harsh punishments imposed. Control and surveillance, online and offline, are part of daily life.”