Tibetans sent to mainland Chinese schools under guise of “progress”

By International Campaign for Tibet|January 12, 2021|

At the seventh Tibet Work Forum in August 2020, Chinese President Xi Jinping called for a patriotic re-education of the younger generation of Tibetans, asking officials to look into “strengthening ideological and political education in schools, put the spirit of patriotism throughout the entire process of school education at all levels and types, and plant the seeds of loving China in the depths of the hearts of every teenager.”

This project appears to be advancing. In December 2020, Chinese state media reported that a propaganda team from the Tibet Autonomous Region visited Tibetan schools and classes in Chinese cities to hold “National Unity Education Activities.” One speaker from the TAR came to give a “[t]alk about the kindness of the party” and instructed students to “love the core, listen to the Party.” 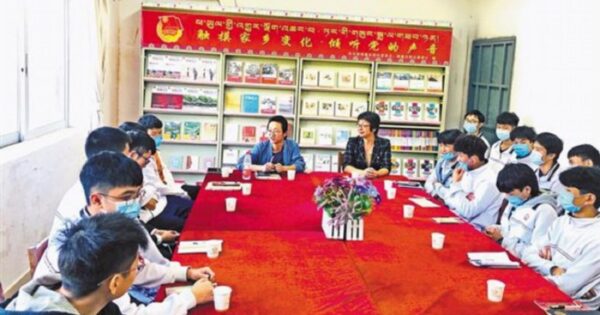 The TAR spans about half of Tibet, a historically independent country that China annexed more than 60 years ago and continues to rule with an iron fist.

On Dec. 26, 2020, the Changzhou Tibetan Middle School in Jiangsu Province held events to celebrate its 35th anniversary. According to state media, this school is among the first schools in Chinese cities where students from the TAR were brought for schooling.

As part of the Chinese government’s ostensible plan to improve “Tibet’s backward education and lack of talents,” special schools and classes have been established in several Chinese cities since 1985. These schools and the Tibetan students are now increasingly seen by Chinese authorities as avenues for indoctrination.

According to information made available on Chinese government websites, as of January 2019, a total of 141,900 students were enrolled in these classes and schools, including 53,000 in junior high schools, 42,000 in high schools, 11,000 in technical and vocational secondary schools and 35,000 in colleges and universities. There were 75 junior high schools and senior high schools in 20 Chinese cities; 29 schools in 12 cities with secondary vocational classes; and 196 colleges and universities with Tibetan students. In 2020, there were 4,472 students taking college entrance examinations.

Nature of schools for Tibetans

Tibetan students studying in junior and senior high schools in mainland China are mostly aged between 12 and 18. In terms of the teaching faculty, only the Tibetan language teacher is chosen by authorities in the TAR, while those teaching all other subjects, including the teacher in charge, are from Chinese cities or provinces.

While the majority of students sent to these schools are Tibetan, there are Chinese students, too, who are the children and relatives of Chinese cadres working in Tibet.

Schools as places to groom supporters of the CCP

Chinese authorities say the goals of this educational system are to provide economic and social development in Tibet and to benefit Tibet’s long-term stability. However, they increasingly look at these special schools and classes for Tibetans as political tools to nurture supporters of the Chinese Communist Party.

Similarly, in a State Council notice to the education commissions in 1996, the running of such schools and classes for Tibetans was referred to as “highly political.”

In 1990, then-President Jiang Zemin declared that interior schooling helped Tibetans understand the motherland and broaden their view of the world.

In an extensive article, Yan Qing, a professor at Minzu University of China, wrote in 2016 about the “special significance” of these Tibetan schools based on the “political environment.” Yan wrote, “From the perspective of the political environment, Tibet is the only province with an illegal government in exile in our country’s provincial-level administrative divisions, and it is based on foreign countries that undermines the development of domestic ethnic relations. The Dalai Clique fled to India in 1959 and established a government in exile in India to carry out criminal activities to split the motherland. They fought fiercely with us in the field of culture and education, and used various means to attract and deceive domestic students to study abroad.”

Yan continued saying, “The success or failure of Tibetan education is related to the safety of our country’s southwest border. Since the political environment and regional location of education in Tibet is more unique than that of ordinary provinces and regions, and the foundation of education development is extremely weak, it is in urgent need of special care and support.”

In 2015, Xi Jinping said that “the achievement of running classes in the Mainland is remarkable and far-reaching, and should be persistently improved, and should be summarized and a long-term plan should be put forward.”

Most recently, state media reported in December 2020 that a propaganda team from the TAR met with students studying in Chinese cities. Among them was Lobsang Dhondup, deputy director of the Tibet Youth Daily, who spoke to students of the Tibetan class in the Zhuhai No. 4 Middle School and “urged the children that the Party and the state have created such good learning and living conditions for you. You should be grateful and use your own practical actions to repay the kindness of the party and the state.” This event was part of the “National Unity Education Activity for Tibetan Class in the Mainland” that has been held annually since it was launched in 2013.

Although the authorities wanted to use these students as propaganda tools, in reality the experience of studying in these schools reinforced their Tibetan cultural identity, according to a survey.[1]

According to a Chinese Academy of Social Sciences report, these schools were successful in imparting education to the students from the TAR. The report says, “data shows the effectiveness of the Tibetan Class in the Mainland in terms of the quantity and quality of talent training, that is, it has cultivated talents at all levels and types that are urgently needed by Tibetan society, and provided strong intellectual support and talent support for the development of Tibet.”

However, not considering the political indoctrination, even in education-related matters, these students had challenges.

According to a research article published by Peking University, “Inland Tibet Class from the Perspective of Multicultural Education” by researcher Nyima Dhondup, the Tibetan language is not counted in students’ total score during the college entrance examination, causing schools to ignore the teaching of Tibetan and students not to have time to take care of it due to the pressure of the college entrance examination.

In the senior high schools, the Tibetan language course is either cancelled completely or reduced to a minor or elective course, as the curriculum is based on the college entrance examination. The college entrance examination for students in the Tibet senior high school class requires a Tibetan language exam, but it is not counted in the total score when they apply to a college in mainland China.

Tibetan students have also become targets for attack by Chinese students. There are violent incidents in which Tibetan students from Tibetan schools and classes in mainland China become victims.

The most serious such violent incident happened in Chengdu in 2011, when on Dec. 14 and 15, Chinese students besieged hundreds of Tibetan students in the Tibet class at the Chengdu Railway Engineering School. Nyima Dhondup, in his article, quotes a student of the school saying many Tibetan students were beaten and admitted to the hospital, while the Tibetan dormitory and classrooms were smashed. Radio Free Asia reported that the Chinese students in the school, who outnumber the Tibetans there, were questioning “Beijing’s policy of providing preferential treatment to ethnic minorities.”

“You should have seen how they insulted us Tibetans in their internet postings,” a Tibetan student told RFA.

Tibetan schools as models for other communities

The Chinese authorities have indicated that the schools for Tibetans in Chinese cities have become a model for ethnic education in China. In a 1999 circular, the State Council said, “Currently, ethnic conflicts continue in some areas of the world. International hostile forces have used national separatist forces inside and outside the country to infiltrate and subvert our country. To further strengthen ethnic education and increase the intensity of talent training in ethnic minority areas is not only related to the economic development of ethnic minority areas and the improvement of national quality, but also related to the country’s stability, unity and national unity. From a strategic point of view, it has special importance and urgency.”

The State Council continued that the schools for Tibetans were “very successful” and “welcomed and affirmed by all quarters,” and the party was evidently drawing lessons from the Tibetan experience when, in the autumn of 2000, classes were started for students from Xinjiang (known to Uyghurs as East Turkestan).

Tibet class in Foshan No. 1 High School in Guangdong Province

Tibet class in Liaoyang No. 1 High School in Liaoning Province

Tibet Class in Liaoyang No. 1 Middle School in Liaoning Province

Tibet class in Zhangzhou No. 3 Middle School in Fujian Province, established in 2004

Tibet Class in Liedong Middle School in Sanming in Fujian Province, established in 1995